What might we learn about our relationship with machines from Ritwik Ghatak’s classic Ajantrik and Buddhadev Dasgupta’s recent Urojahaj – with a detour through Naya Daur? The second of a two-part column 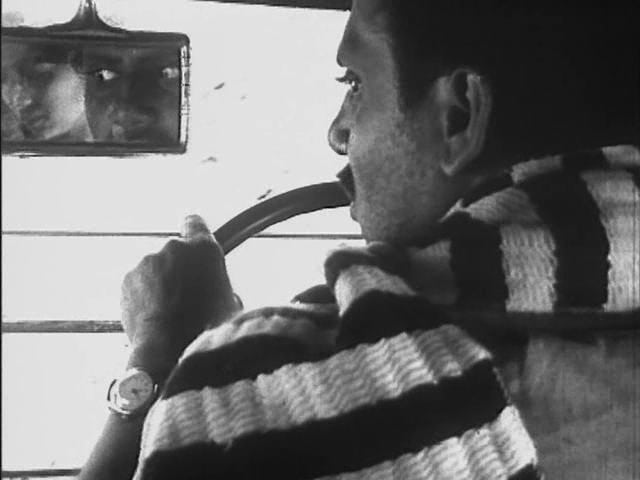 In last week’s column, I suggested that there might be something to be learnt from comparing two Indian films made 60 years apart, each about a man besotted with a machine – Buddhadeb Dasgupta’s most recent feature, Urojahaj (The Flight), and Ritwik Ghatak’s 1957 arthouse classic Ajantrik.

In Urojahaj, the protagonist is a happily married man with a child, and his attachment to the broken-down Second World War plane he finds in the forest comes across as selfish. The mechanic’s quest for something so impractical can only be individualistic. The plane is an obsession that takes Bachhu Mondol away from those he loves. And as he hears more tales from ghosts of betrayed humans, he begins to be suspicious of those that love him: in one sadly revealing moment, when his wife tells him the police are looking for him, he actually asks her if it is she who has reported his discovery of the plane.


In Ajantrik, in contrast, the taxi driver hero Bimal has no-one else to love. The battered taxi seems to fill up the space in Bimal's heart where a person might have been. When Bimal speaks of Jagaddal, it is as a trusty companion – and when the car collapses, he sees it as betrayal.(“Even if I give you my all, I can't win your favour?”) His hunger for human company may be inarticulate, but when he encounters a young woman who has been cheated by her lover, something buried deep within the usually misanthropic Bimal bubbles up to the surface. When Jagaddal appears not to cooperate in his mission to help her, Bimal delivers a well-aimed kick to its engine. That unprecedented moment of anger kickstarts the process that will eventually bring the machine to its knees – and it might be said to stem from Bimal's frustrated effort to assist another human being.


Despite their differences, the close relationship between man and machine in both films seems to turn on excluding the rest of humanity. The same year as Ghatak made Ajantrik, the Hindi film industry also produced a hugely popular narrative about man and machine. Released on August 15, 1957, BR Chopra’s Naya Daur ('The New Age') starred Dilip Kumar as Shankar, a tangawalla who becomes the focal point of a battle between the horse-cart drivers of his village and the evil capitalist son of the village’s feudal landlord. The legendary climactic race between Shankar, straining at the reins of his horse-drawn cart, and the villainous Kundan at the wheel of his bus was staged such that the underdog would win.

But even within Naya Daur’s wishful dream universe, laced with the labour-capitalist bhai-bhai rhetoric that was often as far as Hindi cinema socialism went, Shankar’s victory could only be presented as a one-time thing, a reprieve. The film was intended only to give us pause as we hurtled into the machine age, to consider the fate of the masses who would be left behind if we were not careful.

Ajantrik seems to occupy a mindspace so different that is scarcely recognisable as belonging to the same cultural landscape. Instead of a race between a tanga and a bus, Ghatak has his taxi compete with a train. The creaky, decrepit Jagaddal cannot win. But that does not lead us to anything so simple as a win or a loss for technology. Driving too fast on a curving hilly road to catch up with the train, Bimal must draw back from the edge in the nick of time – and the moment when he does is also the moment when he finally sees the world in which both taxi and train have arrived: disruptions, but here to stay.

What Ghatak shows us through Bimal’s eyes is a festive gathering of the Oraons: women singing with flowers in their hair, bare-chested men with drums, dancing in unison. There is something about Bimal’s gaze that seems to see but not see, the marvellous sight of the human body moving to a rhythm that has existed long before the rhythm of the machine. And yet, as the Oraon man who pushes the broken-down jalopy to Ranchi Station says to his sweetheart, it is the train from this station that takes “our people to Assam and Bhutan, to work in the tea gardens”. A single machine may die, Ghatak seems to suggest, but the machine is here to stay.

Ajantrik extended the concept of pathetic fallacy from nature to the machine. But the human hero of 1957 still saw his favourite machine in human terms, giving his car a name and human attributes; a sense of life and death; even a kind of burial, at the scrap dealer’s. Sixty years later, at the end of Urojahaj, it is the human hero whose life and death are in balance. Bachhu Mondol, running from the irrationality of a tyrannical state, speeds through the forest and out onto what looks like a runway, and the camera pans over the ground, rising higher as if looking on from high. What Bachhu sees is what a plane would see, if it could. The man in search of freedom now models himself on the machine.