A delightful new online film festival to mark South Asian Women's Day defines feminism as “a politics based on principles of equity, equality, justice and peace”

Anantha Ramanan's short film Ticket Please (Sri Lanka, 2018) begins with an older woman preparing a younger man, who might be her son, on how to get to a particular part of town. “The bus conductor speaks Sinhala only,” she says, speaking from the kitchen where she is washing something at the sink. “Give ten rupees exactly. It's very difficult to get the balance from him... If the conductor asks you again whether you have paid, say “Dhunna”. Dhunna means “I have given”.” Before he leaves the house, she instructs him to carry a newspaper in English, saying it will help. I felt a mild sense of irritation. Wasn't the older lady overdoing the multiple instructions, I wondered? And why force the young fellow to pretend to be something he's not? But from the second the young man got to the bus stop, I started to realise that she had been right. Sometimes when you don't fit in, it just makes it easier to pretend that you do.

The young man in Ticket Please is marked by his inability to understand Sinhala; his being a Tamil speaker is cause for irritation. And yet the strapping young bus conductor, so impatient with him for not knowing Sinhala, is only indulgent and excited when an Indian passenger gets on – speaking bad Hindi, gushing about Salman Khan and singing 'Tujhe dekha toh yeh jaana sanam'.

Linguistic politics in Sri Lanka may not seem, on the surface, to have much to do with feminism. But what is feminism really about? Ticket Please seemed to me to make the point quietly but clearly -- it isn't our differences from each other that are the problem, it's whether we've been brought up to regard that difference as either threatening or inferior.

A good film festival always lets you connect the dots in expected and unexpected ways. From linguistic differences made visible on a busride, I moved to gender difference made visible on a metro ride in Please Mind the Gap (2018), a wonderful short film directed by Mitali Trivedi and Gagandeep Singh. An affectionate documentary portrait of transman Anshuman Chauhan as he negotiates the Delhi Metro, Please Mind the Gap never rubs in its metaphors. Anshuman is an effortlessly engaging subject, though, bringing his wry, laughter-filled gaze to bear upon everything he speaks of. In one early conversation, for instance, he maps his personal sense of space onto the world of public transport with a marvellous lightness. “I instinctually create a gap and maintain it,” he tells the filmmakers, going on to describe how he keeps a distance from everyone, men and women, choosing for himself the space between metro compartments, where the wall has his back, as it were. “Kisi se touch nahi hoge”.

But no matter how much he may want not to be touched, or even just to pass unseen, it isn't always easy. Men who have mistaken him for a man jump up apologetically when they see his face and think they have accidentally touched a woman. Security queues, public toilets, the metro's own Ladies compartment -- every space seems insistent on compartmentalising by gender.

In If You Dare Desire (2017), Debalina's fictional telling of the lives of real-life couple Swapna and Sucheta, their difference is less visible on their bodies -- but that doesn't make it easier. Swapna and Sucheta committed suicide by consuming pesticide together in Nandigram, West Bengal, in 2011, with Swapna leaving behind a six-page suicide note. As the film puts it, “Only this much is fact in the film. The rest, fiction.” The poetic urban interlude Debalina creates for the two young women is no idyll, but it allows us to see how it might have been for them if they had escaped to the city, how it probably is for the many South Asian women whose love seems invisible to the heterosexual worlds they inhabit. Until it becomes visible, is instantly interpreted as difference, and that difference as grave and present danger.

But sometimes when you don't fit in, you can no longer pretend that you do.

Posted by Trisha Gupta at 14:23 No comments:

My Shelf Life column for October 2020:

The link between clothes, sexual attractiveness and power is incestuous and can be unnerving. Kannada writer Vaidehi’s stories literally disrobe it. 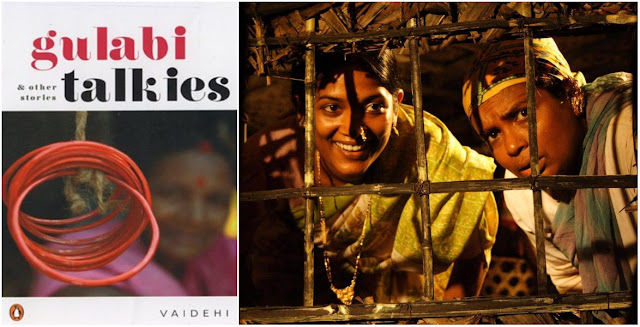 Vaidehi's stories shocked me when I first read them. I don't mean in the manner that the 1945-born writer has apparently “sometimes shocked Kannada intellectuals”, by publicly declaring such things as 'The kitchen is my guru, that's where I have learnt many lessons'. The incongruity there, as a critic cited by editor-translator Tejaswini Niranjana in her introduction to Vaidehi's Gulabi Talkies and Other Stories (2006) points out, lay in one of modern Kannada's most successful writers speaking like a 'full-time grihini or housewife'. And yet, what Vaidehi was doing by adopting such a public stance was precisely why her fiction jumped out at me: she was forcing the (male-dominated, genteel, largely upper caste) world of Kannada letters to engage with the world of women as she knew it. She refused to be co-opted into literariness as they knew it.

Since the late 19th century, women have been writing fiction about women's lives, not just in Kannada, but in Bengali, Marathi, Tamil, Urdu, Hindi and more. So Vaidehi, also Janaki Srinavasa Murthy, born 1945, married to KL Srinivasa Murthy at 23, and mother of two daughters, wasn't the first. But her words lift the ceaseless labour of women's lives out of the domestic space and onto the page with a ringing clarity. Somehow, the closer she sticks to the materiality of these circumscribed, cyclical lives – food and rituals, weddings and babies, illness and mortality – the more starkly we see their political, even philosophical ramifications. As she puts it: “What is important to us [women] is not whether the world is truth or lie. But work, work and more work.”

Among the material objects that recur in Vaidehi's stories are clothes. At one end of the spectrum is what is ritually and socially prescribed for women: the red saris encumbent on shaven-headed Brahmin widows; the gold jewels to measure a bride’s status. At the other are clothes as markers of individuality, the body as a canvas on which fashion can paint new identities.

But what was fashion in this India of sleepy villages and one-street towns, where the age-old injunctions of caste and age and community controlled so much of what people wore? In the title story Gulabi Talkies the opening of a local cinema triggers new dreams: “Day by day the bangle shop began to stock various kinds of face powder and other cosmetics...the seamstress struggled to tune her skills to the new fashions and her creations were passed off as fashionable, causing a commotion in the world of clothing which crossed over into the speech and gait of women...”.

The fashions of Vaidehi's tales may seem basic to us – but oh, how women wanted them. And how willing they were to suffer the consequences, because fashion felt like freedom. In ‘Remembering Ammachi’, for instance, the child narrator helps the grown-up Ammachi pleat her sari pallu “so that both its borders could be seen”. They set out for a neighbour's puja, but are barred by Venkappaya, who has arrogated to himself a status somewhere between adoptive brother and future husband. “How coquettishly you're going to town,” he rages. “That pallu has been pleated in such a way as to show both the breasts.”

The poorer the women are, the more meagre their aspirations – and the more excruciating their non-fulfilment. In Tale of a Theft, the hungry Bachchamma thinks of the prohibitive price of glass bangles while sitting next to women covered in gold. In Vanimai, the titular central character is a woman with mottled, flat feet whose “biggest dream was to own a pair of slippers”. This is nothing short of radical in a milieu where a man called Narasimha can tell Vanimai’s elders never to buy her slippers, declaring with perfect assurance: “Those who use footwear are either the prostitutes of Bombay or the mistresses of the town. Not decent people...”

The spectre of the whore, in fact, is ever-present in these tales. Whether it's Narasimha taunting Vanimai or Venkapayya deliberately ruining Ammachi's secretly-tailored back-button sari blouse, being fashionable makes women attractive – too attractive.

The late Nirad C. Chaudhuri, one of our most politically incorrect writers, once speculated that Indian women have historically had so little free contact with men that they dress only to compete with each other, that is they are acquisitive and overdressed. “It follows from this tradition,” wrote Chaudhuri in 1976, that “a woman in “very smart or piquant dress”... “must be fair prey”. To prove his point he recounted two anecdotes, in both of which “lower-class” men associate being well-dressed with sluttiness.

But of course it isn't only poorer men, or even only men, who tar women for wearing certain clothes. In Vaidehi's Chandale, watching Beena “climbing up the compound in her short skirt” makes the older Rami “want to scream”. In a stunning image, the nervous housewife suddenly imagines the carefree teenager “winking at [her son Satisha] in the style of a Mumbai prostitute”. So obvious is the link between clothes and sexual attractiveness, and between sexual attractiveness and power, that it is all we can do to suppress it in those we believe don’t deserve power. Mostly, that’s other people. Sometimes, it includes ourselves.

Posted by Trisha Gupta at 20:16 No comments: