Post Facto -- Cinema Non-Paradiso: Make-believe and the movies in Bellissima

Posted by Trisha Gupta at 16:32 No comments:

A guest column I did for Business Standard:

Sai Paranjpye's Chashme Buddoor, a light-hearted and mild-mannered comedy which also gave us an unforgettably sweet romance between a bespectacled, padhaaku Farooq Shaikh and Deepti Naval as the irresistible but real girl next door, was recently restored and re-released in theatres alongside a new David Dhawan remake. A distressed Paranjpye has charged Dhawan with having killed her delicately funny film by injecting it with double entendres, bawdy jokes and a general crassness so antithetical to the sensibility of the original that to call the new Chashme Baddoor a remake was a travesty.

I watched both films last week, and I have to confess that while the old one has lost none of its delicate charm, the new one is a rambunctious and rather enjoyable ride. The new film, like the old one, centres on a trio of young men (inaugurating a whole Hindi film tradition of male friendship movies since). One is the sincere student who reads Economics textbooks for pleasure, while the other two spend their time gadding about the empty leafy avenues of 1980s Delhi in search of girls. Or to adopt the celebratory whoop with which they greet every sighting of young female flesh - "shikaar!". The reference to prey may sound shocking, but there's something about Omi and Jomo's unthreatening comicness that makes it not just alright but hilarious. And yet the indiscriminateness of their attentions is enough to indicate the unabashedly joyful sexual basis of their interest. Paranjpye's world may have been innocent, but it was not coy.

That frank vision of youthful (male) hormones is a clue to what made Chashme Buddoor such a remarkable film: its absolute outsiderness to the conventions of the Hindi movie - and even more, the quirky, tongue-in-cheek way in which it chooses to play with those conventions.

In 1981 - the year in which Chashme Buddoor released - the top 10 grossers at the Hindi box office included four Amitabh Bachchan starrers (Yaarana, Kaalia, Naseeb and Lawaaris) replete with dramatic father-son battles and villainous villains on whom revenge had to be wreaked. Other films in the top 10 were a colonial fable involving revolutionary Indian pirates and evil Britishers (Kranti), a reincarnation-revenge-romance (Kudrat), and two stories of star-crossed young lovers (Ek Duuje Ke Liye and Love Story). This was the cinematic universe that Chashme Buddoor emerged into - a universe whose high drama and heroic stunts it both distinguished itself from, and gently but thoroughly mocked. From the first scene, in which the Mehdi Hassan classic of the scorched heart Yeh dhuan sa kahan se uthta hai plays as accompaniment to our heroes' silent communion over a shared cigarette, to having them imagine their romantic conquests as a medley of old Hindi film songs, Chashme Buddoor never stops making fun of our filmi-ness.

Sai Paranjpye was not unique in this sort of mockery. The urban "middle class cinema", represented among others by Hrishikesh Mukherjee and Gulzar, enjoyed poking fun at the more unreal aspects of Hindi films. One of their favourite things to mock was the ubiquitous double role. Gulzar pushed it to its limits (and returned it to source) with Angoor (1982), his superb adaptation of The Comedy of Errors, giving us not one but two pairs of twins. And Mukherjee's Gol Maal (1979) used the idea of fake identical twins as the masterful basis of its comic plot. (Rohit Shetty's reworking, Bol Bachchan, 2012, was grotesque, among other things, because it created a "real" humshakal for Asin - seemingly unaware that Gol Maal's humour was based on mocking the proliferation of twins.)

But Chashme Buddoor went further than those. There's the marvellous scene in which Amitabh and Rekha appear to demonstrate a Hindi movie-style wooing - and how "the technique" falls flat in real life. Earlier, Jomo (the late Ravi Baswani) pretends to be a Bombay producer "talent-scouting" in Delhi, and, in his imagination, Deepti Naval giggles delightedly to hear that "there's a bit of a vacuum in the industry after Jaya ji" that she can fill. In the scene as it actually unfolds, Jomo is crisply rebuffed: she never watches Hindi movies.

Yet, when Naval and Shaikh fall in love and find themselves in a flower-filled Delhi park, they cannot but burst into song. "How do those people in the movies think up rhyming words and tunes on the spot?" muses Neha to Siddharth, before seguing neatly into a half-jokey rhyming song, holding a large flower up like a microphone. And while the climax sets out to stage a kidnapping so that the hero can rescue the heroine filmi-style, Paranjpye decides to play with our now-established expectations by turning the fake kidnapping into a real one. We may laugh at Hindi movies, she seems to say, but we also inhabit them.

David Dhawan, self-declared acolyte of Manmohan Desai - a specialist in mistaken identities and long-lost reunitings if ever there was one - has made a much louder, filmi-er, lowbrow film than the original. But it is also a cheery, self-conscious send-up of the raucous comedies for which he became famous in the 1990s. And in that combination of self-consciousness and inhabiting lies his tribute to Chashme Buddoor.
Posted by Trisha Gupta at 15:36 No comments: 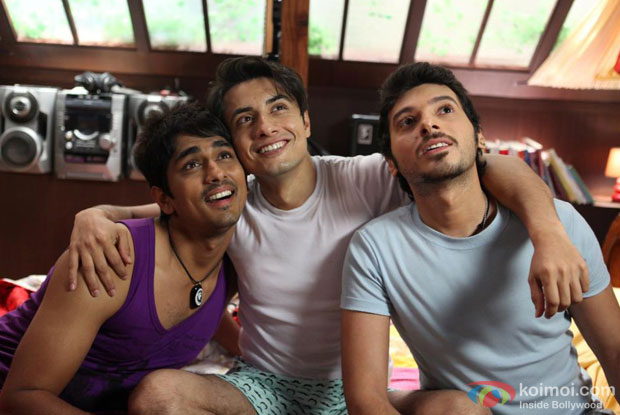 "Full disclosure: I have always been a Chashme Buddoor fan – the delicately romantic, hilariously funny 1981 film starring Farooque Shaikh, Deepti Naval, Rakesh Bedi and Ravi Baswani is one of my favourite Hindi films ever. And I have never been a David Dhawan fan. I spent the 90s avoiding the raucous comedies that Dhawan produced in quick succession, most successfully with Govinda – Aankhen, Raja Babu, Banarasi Babu, Saajan Chale Sasural, Bade Miyan Chhote Miyan. The only David Dhawan film I can remember laughing rather than cringing at is Hero No. 1, where Dhawan remade another classic of our quietly funny ‘middle class cinema’- Bawarchi. And Dhawan’s 2011 release, Rascals, starring Ajay Devgn, Sanjay Dutt and the unfortunate Kangana Ranaut’s cleavage, was among the most distressingly sexist, grotesquely tasteless films of the year.

So I went into David Dhawan’s remake of Sai Paranjpye’s classic expecting to abhor it. Imagine my surprise that I did not, and then my shock when I found that I was thoroughly enjoying myself."

Read the whole piece HERE.
Posted by Trisha Gupta at 23:14 No comments: