Why sari-wali-bhabhi and late night show go perfectly together, and other thoughts on sexiness in India, after watching Tumhari Sulu. 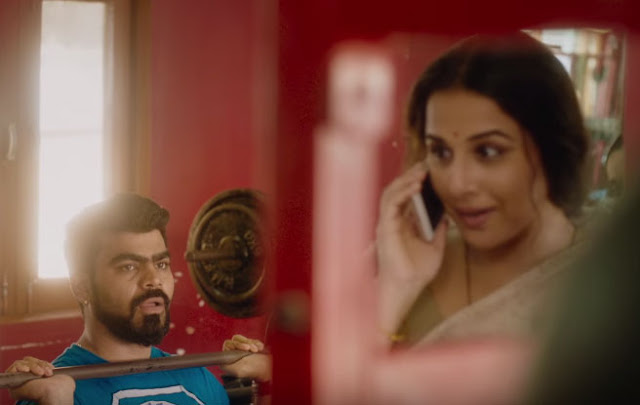 Tumhari Sulu is a delightful film, though it contains several different ideas jostling for primacy, and sometimes it seems a pity that it refuses to plump openly for one of them. The first of the themes advertising man Suresh Triveni picks is the gap between the heard and the seen, the imagined and the assumed, the external and the internal. At one level, the narrative focus on voice is a way of undercutting modern consumer culture's unrelenting focus on the visual, on how appealing things look - as well as playing with our idea of what a sexy woman looks like.

The seductive disembodied voice of the radio jockey is the perfect device to make us rethink our painfully circumscribed ideas of what - or who - is sexy. We've already had one depressing cinematic subplot this year about a young man who can't reconcile his actual experience of sexiness with his preconceived notions of what sort of woman could turn him on: in Lipstick Under My Burkha's segment about Ratna Pathak Shah's intimate telephone conversationist, "Rosie". And back in 2011, Shujaat Saudagar directed awonderful two and a half minute short fiction film called A Day in the Life of India (Belle de Jour) which turned on a similar disjuncture between our unimaginative mainstream ideas of sexiness and the multi-hued, unpredictable reality of it. (The short is available on Youtube, and worth looking up, not only because Tumhari Sulu seems to owe it some acknowledgement).

Triveni's script might be seen as a response to a world in which people's potentially varied individual tastes are mainstreamed into predictable singularity by mass advertising. Tumhari Sulu pushes back -- though perhaps not with enough conviction -- against the increasingly ubiquitous vision of the attractive female body peddled by the Indian fashion and entertainment industries. By turning Vidya Balan's middle class housewife, with her ample sari-clad figure and unfashionably plaited hair, into a fantasy woman for the (mostly male) listeners who tune into her late-night radio show, Triveni plays with one of the more visible contradictions inherent in contemporary Indian sexual culture: the fact that while Bollywood and fashion valorise the skinny, fair, straight-haired, urban, Westernised young woman, a huge amount of desi erotica and porn is built upon the sexualisation of the generously endowed, sari-wearing bhabhi figure.


That is the powerful trigger that the radio channel boss, Neha Dhupia's Maria, is drawing on when she comes up with the idea of a programme for Sulu to host: "Sari wali bhabhi, late night show". It is an association that at least every Indian man in the film's audience will have no trouble making. There's no disjuncture there.

And yet the "sari-wali-bhabhi"'s attractiveness can apparently now only be a dirty secret. Everywhere that Vidya Balan's character goes looking for a job, the ostensibly English-speaking, Western-clothes-wearing, thinner and inevitably younger women who give her the once-over are visibly judging her for not being more like them. "Sari-wari nahi chalegi," declares the woman telling Sulu about a low-paying job at the gym. "Kabhi job kiya hai?" asks the reed-thin, shrill receptionist at Radio Wow, looking down her nose.

But while she's too 'behenji' for the gym types, Sulu is too free-spirited for her superior elder sisters. A desperately unlikeable pair, Sulu's sisters stand in for the stultified idea of respectability that holds the middle class in its vicelike grip. The terror of being seen as 'cheap' is deep, and it isn't just men but women who use it to police other women. And judgements fly thick and fast from this end, too - based on what you wear, how late you're out, whom you speak to.

Sulu is that wonderfully identifiable in-between figure, squeezed by both sides, and still effervescently herself. She embodies both the underestimated housewife character that we have started to see on the Hindi film screen from Gauri Shinde's English-Vinglish onwards, and the unapologetically lusty wife with a taste for the good things in life, played by Balan herself in 2013's Ghanchakkar and 2014's Shaadi ke Side Effects, or by Huma Qureishi in Jolly LLB 2.

Watching Balan light up the screen as Sulu, it's blazingly obvious that no-one but she could have conjured up this combination of playfulness and wholesomeness, producing gentle innuendo out of domestic metaphors - and vice versa. In the film's most sugary scene, Sulu gets a call from an elderly gentleman who says she reminds him of his wife. There's some channelling here of Balan's own earlier turn as an RJ, a decade ago, in Lage Raho Munnabhai, where her slightly insufferable goodness was on display in her attachment to an old age home.

But even apart from this homage to Balan's filmic history, Triveni knows what he's doing. He plays on the use of radio in the cinema (a huge subject which this column has barely touched) by combining the visual and the aural: making sure we see the sympathy-generating figure of the old man heating up his dinner for one, and showing us that Sulu, though she can't see him, has the instinctive femininity to respond to him exactly as she should: with warmth and just a smidgeon of flirtation, but nothing too inappropriately risque. Here the sari-wali-bhabhi shows us that sexuality can't be divorced from one's womanhood as a whole, and that can't be separated from one's humanity. It is a fine model of sexiness with which to leave the cinema.
Posted by Trisha Gupta at 17:38 No comments:

Two disturbing 2017 films — one set amidst Norwegian Pakistanis, the other among Russian Jews — present gripping portraits of young women fighting to not be sacrificed at the altar of community. 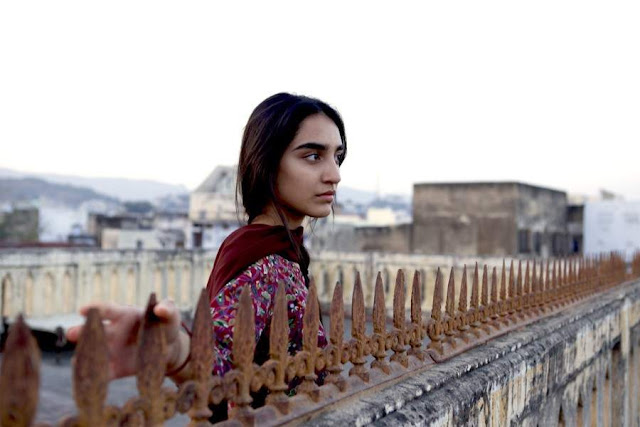 A teenager brought up in Norway is suddenly transplanted to a Pakistani small town and finds herself the subject of prurient attention. “Why have you come here?” hiss her headscarf-wearing new classmates. Aware that she is on display, the new arrival tamely offers up what she thinks is the good-girl response expected of her: “I’ve come to learn about my parents’ culture”. But what’s flung back at her is a stinging accusation: “Not your parents’ culture! Your culture!”It is a relatively minor moment in what is a film full of harrowing scenes. But that misrecognition goes to the heart of Iram Haq’s What Will People Say: What happens when your parents’ culture doesn’t feel like your own? One answer – a wrenching, difficult one – is that sometimes, then, your parents don’t feel like your own.

Haq’s film stars Ekavali Khanna and Adil Hussain as Pakistani immigrants who are happy to educate their daughter Nisha (the affecting Maria Mozhdah) and even imagine a career for her – until they come to suspect that she is leading the life of the Norwegian teenager: dancing, drinking, dating. At home, she obeys when told to wear a jacket over a revealing blouse; she serves snacks to the aunties; she pretends her texting exchanges are all about school work. But Nisha is indeed leading that life, just secretly. All hell breaks loose when her father discovers a boy in her room.
The film paints a depressing picture of the Pakistani community in exile, but it doesn’t ring false. If you’ve grown up in South Asia, you don’t need to be told that Haq based her film on a traumatic episode from her own Pakistani-Norwegian childhood to be convinced by Adil Hussain’s finely wrought transformation from loving, indulgent father to uncontrollably violent patriarch. The father who proudly displayed his academically bright daughter now feels only burning shame on her behalf: “Sab log hum par hans rahe hain.”The community’s solution is to send her ‘home’ — to a country she has never lived in. Under the tutelage of her stern Phuphi (the always effective Sheeba Chaddha), Nisha learns to roll rotis, drape a dupatta and keep her head down. But the sexual awakening that was sought to be crushed in Norway happens instead in Pakistan, with worse effects. Now the only way to deal with such a wayward daughter is to marry her off, to trade her freedom in for the family’s honour.Haq’s film was shown at the Dharamshala Film Festival in early November.At the International Film Festival of India a few weeks later, I saw a stunning Russian film called Closeness in which, too, a young woman is sought to be clamped into conformity. Set in the late 1990s in the filmmaker’s hometown of Nalchik in the Northern Caucasus, Kantemir Balagov’s film won the International Critics’ Prize for best film in Un Certain Regard at Cannes. It centres on the tomboyish Ilana (the superb Darya Zhovner), who likes nothing better than helping her mechanic father fix cars. But as in Haq’s film, a young woman of a certain age must start behaving a certain way, and it is her mother who lays down those rules. In a celebratory family scene with strong echoes of WWPS, a sulky Ilana is made to change her overalls for a dress and help her mother in the kitchen. 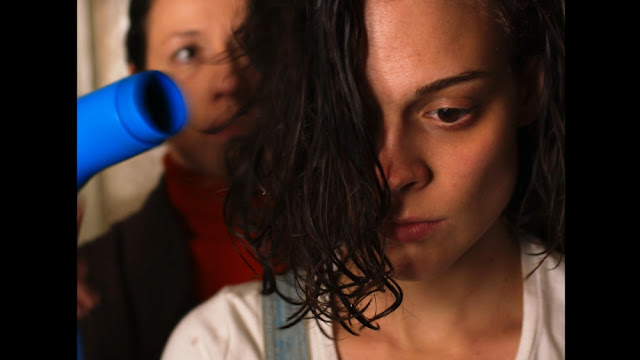 Ilana is also carrying on a clandestine affair with a boy from the town’s Kabardian community, which has a tense relationship with the Jewish community to which she belongs. Where Haq largely uses marked shifts in body language to register the contradictions of her heroine’s life, Balagov unsettles us by alternating between the raw, barely-lit seediness of Ilana’s secret backstreet life and the family’s domestic interiors, whose rich rusts and deep greens have the dramatic shadows of a Caravaggio painting.Nalchik’s Jews are different from Norway’s Pakistanis, but Ilana’s clash with her parents resonates strongly with Nisha’s. In one exceptional scene, Ilana’s mother instructs her angrily, “You won’t be with him. He’s not from our tribe.” Ilana’s response is fierce and wordless — she puts her hand to her mouth and produces a long ululation, mocking her mother’s use of the word ‘tribe’. Unlike WWPS, the crisis in Closeness is not bought on by Ilana’s sexuality – but her insistence on displaying proof it certainly causes the sensation she intends it to.These are not films that will be viewed as similar, and indeed they are far apart in pitch and tenor. But both produce for us the disturbing figure of the young woman forced to recognise that she is not quite as human as her brothers; that her social value lies not in what she might desire —but only in who can be made to desire her.