WITH DELHI’S GRADUAL transformation from boring, buttoned-up babudom to a city with space for the puppie, the plush and the jholawallah, Mumbai — the country’s erstwhile undisputed First City — has been getting a run for its money. Mumbai’s long-term hold on Hindi cinema’s urban imagery has recently got competition from a spate of movies attempting to ‘do Delhi’ — most famously Oye Lucky! Lucky Oye and Dilli 6. Swinging jauntily into this battleground of Mumbai versus Delhi comes 99, which lays cinematic claim to both cities by transposing Mumbai characters to Delhi.

In a spin on the classic caper, small-time Mumbai crooks Sachin (Kunal Khemu) and Zaramud (Cyrus Broacha) find themselves indebted to a bhai-cumbookie called AGM (a superb Mahesh Manjrekar) and must go to Delhi to extract money owed to AGM by a gambler called Rahul (a half-hearted Boman Irani). The dialogical introduction to Delhi is funny: Khemu and Broacha reeling off the many things wrong with the city: their prize-winning point being that all Delhi girls are called either Neha or Pooja.

But all the promise of these opening scenes is squandered once the boys get to Delhi. For one, most of what we see of Delhi is a five star hotel (and a dubious glittering skyline seen from the hotel’s glass-fronted elevator), Boman’s pokey little flat and even pokier bank cubicle. Both the latter are suspiciously un-Delhi-like spaces; the bank has the added problem of an indubitably Parsi name. Also, with the exception of Vinod Khanna (effortless as big-time gambler JC), there’s something indefinably off-kilter about the ‘North Indian’ characters: the possibly fraudulent taxi-driver, the Bhojpuri film star, the Bihari extortionist — none seems to entirely fill out the outlines of the roles they’ve been given. The women seem to settle into their parts even less. Soha Ali Khan as a carefully-coiffed hotel receptionist (called Pooja, of course) has not one interesting scene, and the talented Simone Singh’s phone conversations with husband Boman are excruciatingly slow.

There’s clearly been a lot of attention paid to conceptualising the moment in which the film is set — the late 1990s conjuncture of liberalisation, television, cricket and match-fixing is beautifully realised, with mobile phones featuring both as aspirational gadget and object of runaway speculation. One wishes similar attention had been paid to the characters as well.

My 'Back of the Book' column for Time Out Delhi:

Cities can be mapped in many ways. For my father, the kind of Bengali who spent his childhood breakfasting on a daily handi of rosogollas with his grandfather, neighbourhoods are marked by sweet shops: all of Calcutta littered with remembered mishti. What I’ve been thinking about recently is a meat map of Delhi. The thought was triggered, I think, by a somewhat odd remark by the writer MG Vassanji, in his recent memoir-cum-travelogue A Place Within, to the effect that Delhi until the 1980s was a vegetarian city, unless you went to Shahjahanbad – or a five star hotel. It isn’t true, of course – tandoori chicken must have been as orderable from the local takeaway joint as it is today, not to mention shredded lamb and chilli chicken from the Aka Sakas and Fujiyas. I have vivid memories of myself as a six-year-old eating barra kababs in a car outside Pandara Road. But it’s an interesting remark, because it makes one think about how the city displays itself to different kinds of people.

Having grown up sandwiched between the staunchly non-vegetarian influence of my father’s side, and an egg-abhoring Jain khandaan on my mother’s side, I know that the same city, depending on who you are, can conjure up very different images: oases of meat-eating holding out against a joyless desert of vegetarianism, or a vast carnivorous jungle, whose frightful sights and smells must be shut out as one journeys in search of the rare untainted kitchen. Within these broad territories, there are subcategories. So, for example, Old Delhi, fetishized as meat-eater-heaven, can be fully as fulfilling for someone in search of no onion, no garlic Marwari thalis, or the perfect kanji vada. On the other hand, one shouldn’t be surprised if for someone like Vassanji, butter chicken doesn’t quite cut it as meat, making the hearty kukkad-country south of Lutyens’ Delhi appear an unending morass of rajma-chawal. So, like so many non-vegetarian visitors to the city, he makes the necessary pilgrimage to Karim’s, noting dutifully that he liked the shammi more than the seekh.

There’s a flip side to this, which is that even chicken-lovers who ought to really be staying put outside Rajinder da Dhaba (or motoring up to Moti Mahal at most), feel obliged to pay obeisance at Karim’s – even if what they end up eating there is Noorjahani chicken with paneer paratha. Because chicken, whether the red meat aficionados like it or not, is our city’s default non-vegetarian food, the gift of Punjab to post-partition Delhi. Order mutton in an untested, standard-issue Delhi restaurant (outside of Nizamuddin and the Jama Masjid area, where the remnants of Mughal slow cooking still seem to survive) and nine times of ten, it isn’t tender enough. Well-cooked pork is even more complicated: yes, there are Chinese restaurants, but it’s still at its most interesting in the city’s Tibetan enclaves, or in tiny North Eastern outposts, on university campuses or in Dilli Haat.

The point is that it depends on how you look at the city. The more you explore, the more maps you’re going to find. To things you’re looking for, and even those you’re not. 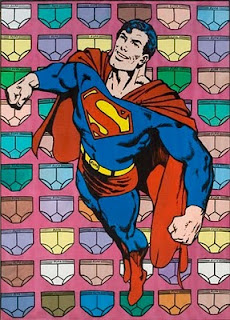 THE FIRST THING you see when you enter Freddy Birdy’s first show of paintings is an enormous white canvas with a glossy-haired brunette suspended sexily upside-down, as if she’s being poured out of the giant Heinz ketchup bottle in the top right corner. Her scarlet lingerie echoes the McDonald’s red of the cartons in the other corner, from which bunches of fries sprout like slightly surreal flowers. The label reads, “Your proximity to a McDonald’s is far greater than your proximity to love.” In another painting, Superman rises in his famous underwear-worn-over-tights, against a background of Rupa briefs in Indian comic book colours.

At one level, these images are exactly what you might expect from a man who’s worked with several well-known advertising agencies (Grey Worldwide, Mudra and McCann Erickson) and orchestrated award-winning campaigns for brands like Thums Up, Vimal, Polo mints, Samsung and Taj Hotels: the interest in surface, the use of iconic images, the playful insertion of text, the shiny brightness of it all. But Birdy is reluctant to be seen as drawing on an advertising aesthetic: “Advertising images are more falsely-real, if you know what I mean: shiny hair, juicy burgers, happy families. Art is as disturbing as you want it to be.”

Neither is he happy with the boundaries around art — probably why he chafes at questions about his ‘text-paintings’: the tongue-in-cheek A Perfect Life, a dartboard with “Blowjobs” crowding the periphery and “Art” at the centre, or The Vocabulary of Fidelity, a gentle story-canvas. “I find that text has not only its own visual grammar, as a mass of words, but when read, it’s even more beautiful. You can form your own paintings. I don’t think that art has to ‘look’ like art: it should intrigue you, beguile you, thrill you, disturb you, entertain you. Art is anywhere you seek ,” he insists. “The way a housewife rolls out perfect rotis, isn’t that an art?”

This desire to establish the personal and the domestic domains as legitimate spaces for art is echoed in Contact Arora Properties, an enlarged version of a floor plan for an apartment (presumably Birdy’s own), with appropriate personal resolutions scribbled in. In one room, the artist’s scrawl declares, “I will drink more water.” And follows it up immediately with, “And vodka tonics.” A square marked “Bathroom” reads, “I will shower with a friend/I will save water”. It’s not always clear whether these sentiments are linked, but the juxtaposition opens up a space for laughter, which is integral to Birdy’s notion of what good art can do. “I think that Indian art has been serious for far too long. Why should great art be intense and brooding?” Birdy is determined to take everything — including himself — down a peg or two, but always with humour. If There was a time when nobody ate sushi provides pithy one-liners by which to navigate our era, Chain Painting is an extremely funny take on the fears and pretensions of the Indian art world. While he aspires, like his favourite Andy Warhol, to be the carefree but revealing chronicler of an era, for many people his work will stop short of such an achievement, evoking instead the aphoristic wit associated with the best advertising. Except here, as Birdy points out with characteristic candour, “It’s not promoting anything, except possibly the artist himself.”

ELEGY COMES WITH impressive baggage: It’s based on a novel by Philip Roth, directed by the Isabel Coixet (best known for the difficult but unforgettable The Secret Life of Words) and stars heavyweights like Ben Kingsley and Dennis Hopper with the superb Penélope Cruz. Perhaps, it’s these expectations that are to blame. Elegy is among the most disappointing films I’ve seen in a long time.

David Kepesh (Kingsley) is a sixty-something New York professor who’s a bit of a Renaissance man — he teaches critical theory, reviews theatre, plays the piano and even develops his own photographs, while regularly appearing on television to critique America’s puritan heritage. He also makes full use of this high-culture persona to seduce whichever of his students takes his fancy — being careful to do so after grades have been handed out, of course. Then one such affair — with gorgeous Cuban-American student Consuela Castillo (Penélope Cruz in ridiculously infantilising bangs) — ends up becoming much more complicated than Kepesh can handle: she falls in love with him.

Kingsley brings to the role the requisite, if slightly distasteful, rakishness, but everything he does and says seems so trite and well-rehearsed (“You know something, you’re a work of art”) that it’s hard to see what the sincere, watchful Consuela sees in him. Coixet’s deliberately composed frames and too tasteful lighting don’t help dispel the sense of stagey-ness.

The film’s first half is faithfully Roth, in that the women are beautiful cyphers and the few scenes that ring true are the ones between men: Kepesh exchanging confidences with old friend George O’Hearn (Dennis Hopper) or battling his estranged son (Peter Sarsgaard). Patricia Clarkson, Kepesh’s longtime nostrings- attached lover, is fascinating but gets too little screentime. The only thing one can say in favour of the film’s blinkered male point of view is that it’s made explicit by the male characters themselves: “Beautiful women are invisible,” Hopper muses at one point, “we never see them — because we’re blocked by the beauty barrier”. In a script so heavily tilted against its women, Cruz’s heartfelt performance is nothing short of miraculous. While it’s hard to find her believable at first, she holds attention, managing to pull off the melodramatic second half with disarming vulnerability. It’s almost worth watching just for her. Almost.