Delhi: Postcards from the Last Century

On a photography exhibition: 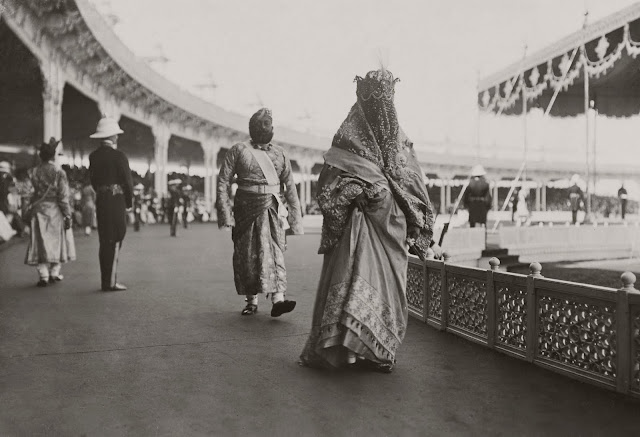 Images courtesy of Alkazi Foundation for the Arts

The Alkazi Foundation’s newest exhibition of vintage photographs is an ambitious one: it takes as its subject a much-photographed city, while limiting itself to images from a time that ensures that very few visitors to the show will recognize that city as one they know. 'Historic Delhi: Early Explorations of the Camera c. 1860-1950', showing at the National Gallery of Modern Art, consists almost entirely of photographs from the last century of colonial rule. But under that broad rubric is a variety of pictures.

There are memorable – if strangely empty – images of Delhi’s monuments after 1857 for example, created by pioneering photographers like Samuel Bourne and Felice Beato, and there are high-quality photographs, often of the same monuments, taken for documentary purposes by the Archaeological Survey of India. There are photographs by the famous pre-independence studios, like Lala Deen Dayal, documenting with aplomb such grand affairs as the Delhi Durbars of 1903 and 1911, or showing troops being dispatched along the Grand Trunk Road, a cloud of dust rising around the horses’ feet. There are a few lovely, carefully chosen pictures from the 1940s and 1950s, mostly taken by the news photographer couple Maneckshaw and Homai Vyarawalla – these include some haunting images of Ramlila performers. And finally, there are the anonymous images – annotated, if we’re lucky, with a year and a subject.

In some ways, it is these last that are the most interesting, because they fit less easily into any preconceived category in our heads. Looking at an image like ‘Miss Azijan of Delhi, c.1905’ – a young and pretty woman, photographed without purdah and alone, in 1905 – one imagines she must be a courtesan. But not knowing the photographer or his purpose – British or Indian, old or young, official or tourist, admirer or anthropologist – sharpens our interest. One’s eyes linger longer on Miss Azijan’s carefully arranged pose: one knee placed perfectly upon another, the self-possessed finger on her chin, and the face that remains somehow towards the camera – even as her gaze turns intriguingly away.

Sometimes, of course, a mere caption is enough to slot the image: a shy looking young girl with large earrings, dressed in gypsy fashion, can never escape the words, ‘Delhi Dancing Girl, c. 1905’. It was Jean-Luc Godard who once pointed out that the photograph is “physically mute”. “It talks,” he said, “through the mouth of the text beneath it.” Sometimes, I suppose, that can be a good thing. There are certainly moments when this exhibition comes to life through the inscriptions. Not contemporary curatorial ones (though those are informative enough), but old inscriptions that mark the image, conjuring up with great immediacy the past that lies congealed within it. A postcard with an image of the Mutiny Memorial that bears an exceptionally clear Leighton Buzzard postmark for May 23, 3pm (though the year was illegible to me) – and this laconic message: “Dear Flo, This place was put up by comrades of the men who died in the mutiny.” Closer to the bone is the image of Bara Hindu Rao, with a handwritten inscription as follows: “Our main picquet during the siege. Very hard fighting all round this place.”

Whether the past you’re looking for lies in the stately and studiously composed archival image, or in the postcard accidentally discovered, this is an exhibition worth visiting.

(Published in The India Tube)
Posted by Trisha Gupta at 14:40 No comments: