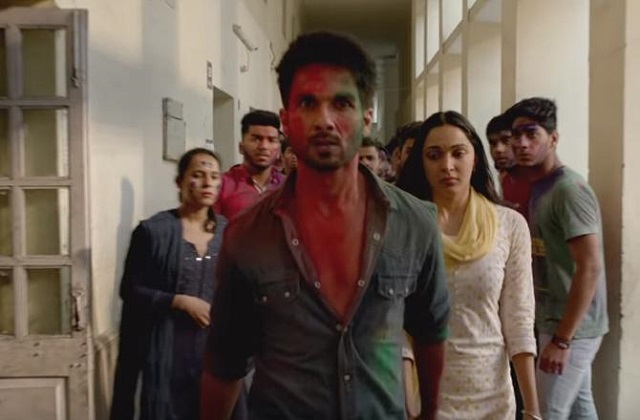 The Holi scene in Kabir Singh features the devoted friend and sidekick, Shiva (Soham Majumdar), assuring the hero, Kabir (Shahid Kapoor), that his not-yet-quite-girlfriend Preeti (Kiara Advani) is safe: she has been seen in the girls' hostel with not a smidgeon of gulaal. “Don't worry, you'll be the first to put colour on her,” says Shiva. Almost immediately after, though, Kabir gets a panicked call. When he reaches Preeti, she is shaken and weeping, and her white clothes have splotches of colour. Kabir holds her for a few seconds, then tells her to go get changed. Meanwhile, two cowering juniors report, quaking, on where the colour was put on Preeti: her chest. Preeti’s assaulters, it is divulged, are Kabir's football rivals from another medical college, whom he has publicly beaten up during a recent game. The comeuppance of the villainous main rival follows, with Kabir again beating him up in front of his college-mates, hurling abuses all the while.

This single scene encapsulates a great deal of the cultural matrix we live in, whose many assumptions about men, women, sex and gender are the seedbed that throws up a film like Kabir Singh [originally made in Telugu as Arjun Reddy (2017)]. Holi, the film implicitly decides, is only a carnival for men. Or at least Preeti cannot express any desire to participate (although other girls in the hostel seem to be enjoying themselves). The colour/sex metaphor couldn't be more direct: Kabir assumes other men want to colour Preeti, and he has reserved the right to be the first. Meanwhile, Preeti, her virginal fearfulness signalled by the pristine white kurta, is simply assumed to be waiting for him.

Holi becomes the locale for a security discourse created entirely by men. Some men endanger the woman's sexual safety, another designates himself protector. But that protection is premised on his ownership of her. More ironically, her very need for protection is premised on that ownership: Preeti becomes a target only because she is ‘Kabir's girl’.

The other profoundly ironic part of the scene for me is Kabir's rhetorical question, as he bashes Amit's head in: “Teri ma ko chhuega to accha lagega, madarc**d? (Will you feel good if your mother is touched, motherf**er?)”

Women in patriarchy are not people; they are only the most important symbolic signifiers of relationships between men. They are the means by which men compete with each other, hurt and humiliate each other, measure the degree of harm done to each other. And sometimes the ironies are too great for the language to accommodate. (In a later scene, the film does seem to gesture to the ridiculousness of mother-related swearwords – but it’s because the joke is more literal: Kabir, wrestling his brother Karan with a “Teri ma ki”, receives a half-chuckling “Meri ma teri kya lagti hai?” in response.)

Another thing to note in the Holi scene is how Kabir warns Amit never to touch Preeti again – not because molesting a woman is a terrible thing to have done, but 'because I really love her'. All other women, Kabir's behaviour through the film makes clear, can be treated purely as human receptacles for his raging phallus, even potentially against their will – friends’ cousins inquired about with only sexual intent, professional colleagues lunged at in hospital rooms, and in one egregious instance, a woman who changes her mind about having sex told to “open up” at knifepoint. Our hero even persuades a famous actress to “help [him] physically”. The fact that he then gets into a consensual, intimate, talk-y relationship with her is conveniently ignored: he dumps her angrily the moment she utters the L word.

So Preeti is special – but only because she is, as he puts it on more than one occasion, “Kabir Rajdheer Singh ki bandi.” (The word “bandi” is perfect, because it can mean a woman, or a female slave or bondswoman, potentially a servant of God). The “aur kucch nahi” that follows is said in anger, and the film later gives Preeti a chance to turn the phrase back on an errant Kabir. But she has displayed no signs of extraordinariness when she first catches Kabir's eye: when asked what he likes in her, all Kabir can say is “I like the way you breathe.”

Of course, we are meant to know the real reason Preeti is special: because she is capable of loving Kabir back. And the film leaves us in no doubt that its eponymous hero is exceptional: alpha male, ace sportsman, exam-topping medical student, alcoholic but high-functioning surgeon with a brilliant record, and to top it all, rule-breaker extraordinaire.

Kabir's refusal to be controlled by rules can involve moving his girlfriend into a boys' hostel room, or defying the principal's injunction to apologise for his violence. In a world as regimented as this one, where the external world's rules of caste, gender and class combine with centralised exams and institutional seniority to form a stifling hierarchy, Kabir's uncontrolled anger is greeted less with censure than with awe. There is so much suppression around us, the film wants to suggest, that a man who feels anything strongly is a hero.

In this vision of the world, the crazy boy is also the only one who knows how to get his father to cry, or play his grandmother's favourite song at her funeral, its disallowed liveliness triggering real emotion. Kabir Singh is a rebel without a cause – but not if we believe the film's millennial message, in which self-expression is the only cause you need.