Status and the status quo

Anubhav Sinha’s fearless Article 15 uses a pacy police procedural to make Indians sit up and pay attention to an aspect of our lives we pretend not to see: caste. 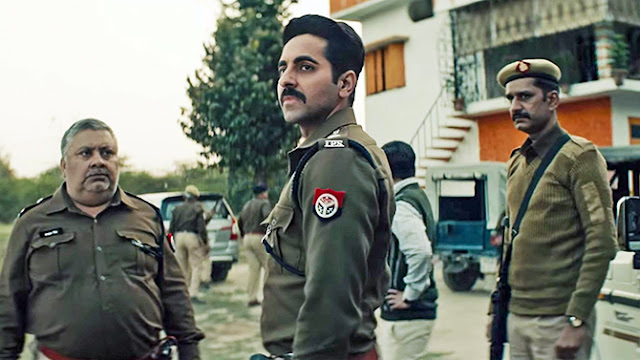 In an early scene in Article 15, a newly anointed IPS officer called Ayan Ranjan is being driven to his first posting when another policeman tells him a story. When Ram returned from his 14-year exile to finally claim his late father’s kingdom, the villages of Ayodhya lit up their homes with diyas in celebration. But one village had lit no lamps. “Why is there no light here?” asked Ram of the villagers. “Our darkness makes your palace shine even brighter,” they replied.

This story is, of course, told in the Ramayana, a part of the origin myth of Diwali, and one among thousands of tendrils of story that curl out of the central vein of the great epic. Its appearance at the beginning of Anubhav Sinha’s film may seem to come apropos of nothing – but in fact we are being led expertly, chillingly, to the underlying darkness that illuminates our palaces.

For it seems no coincidence that this story, about an epic hero’s ascension to the throne, is told to Ayushmann Khurrana’s character, Ayan: a young man about to ascend to a less mythic, but very real position of power. And it also seems no coincidence that the teller is an older colleague, a local man with far greater experience as a policeman, but one who is fated to remain much lower down the bureaucratic hierarchy. Almost none of those who enter the police at a lower level are able to rise through the ranks into the top administrative grades that are automatically handed to those who qualify through the national civil service examination. The Indian Police Service, too, is a kind of caste.

As a St Stephen’s College graduate who only returns from travelling around Europe at his father’s bidding, Ayan is clearly from the upper echelons of what we Indians insist on calling the middle class. He has the educational grounding and the cultural capital needed to clear the civil services examination (which, it is suggested, his old friend Satyendra (Aakash Dabhade) does not). He is also a Brahmin. And now, as the IPS officer in charge of Lalganj, he sits at the top of every possible hierarchy. And hierarchy, with caste at its root, is Sinha’s chosen theme.

By making their protagonist the epitome of privilege, Sinha and his screenwriter Gaurav Solanki demonstrate how hierarchy can be invisible to those who do not suffer its privations. But when that privileged outsider sets out to educate himself, we see how insiders identify themselves and others by their birth-based positions in the pecking order – and how each and every action is governed by a knowledge of those positions. So if the shop is in a Pasi village, then water from it will not be consumed by anyone higher up in the caste hierarchy – i.e. most people. The feisty Dalit woman activist (Sayani Gupta) might get a job cooking midday meals for government schoolchildren, but as soon as her caste becomes known to the eaters, the food is simply thrown away. From sharing a meal to giving a job, from education to marriage to party politics, caste is the invisible filter through which all Indians perceive one another.

Even for those who successfully fight or work their way out of their ascribed positions, it is almost impossible to achieve social equality. The film offers a sharp take on how this is true even within the police force, whose members wield so much institutional power. The most complex character in this regard is that of Jatav ji (played by the ever-brilliant Kumud Mishra), and its most powerfully etched relationship that of Jatav with his colleague Brahmdutt (an equally superb Manoj Pahwa, whose opening line “In fact Brahmdutt Singh, sir” reveals a great deal about him – as does his feeding of stray dogs, which evoked for me the UP chief minister’s feeding of calves).

The point Sinha and Solanki drum in is that our collective belief in hierarchy is still way more powerful than the equality on which our republic is premised. It is civilisational. And more than 70 years since we elected to govern ourselves by a Constitution that declares us all equal, we are still unable to see beyond the filter.

Those at the bottom of the hierarchy are hardest hit by this: as the film’s most promising but least fleshed-out character, the “Daliton ka Robin Hood” Nishad (Mohammad Zeeshan Ayyub), puts it, “We sometimes become Harijan, sometimes Bahujan, we just haven’t managed to become plain and simple jan yet, that we might be counted in the Jan Gan Man of the national anthem.”
But those at the top are loath to cede their positions of power, often justifying the status quo in ‘practical’ terms. “Aukaat mein nahi rahengeSir, toh kaam hi nahi kar payenge (If people don’t stay in their place, no work can be done),” says local contractor Anshu Nahariya. Then he adds, “Aukaat joh hum denge wahi hai. Aur jo humko milegi woh hamari hai. Aukaat toh sabki hoti hai na Sir. (Status is what we give them. And what is given to us, that is ours. Of course everyone has a status, Sir.)”

But our philosophical justifications are much worse. “Sab baraabar ho jayenge toh raja kaun banega? (If everyone becomes equal, then who will be king?)” as the driver of the police jeep asks, not quite rhetorically. To live in a country where Article 15 is not just the law, we shall have to become a people no longer seeking a king.