Picture This: That Working Class Fan

My BL_Ink column from yesterday: 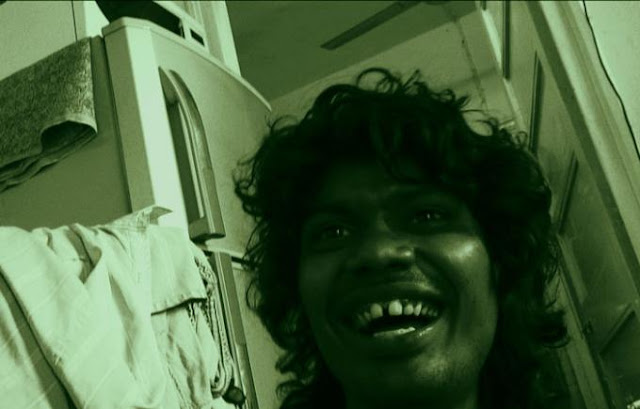 In the grainy darkness, the young man’s face is lit up only by an eerie green light — and by his memories of the video theatres in which he spent his childhood. A ticket was ₹10, and every night of the week had a genre allotted to it: Mondays were for action, Tuesdays for romance, Wednesdays might be horror. “You got to see new films, old films, and even very old films. But even watching films we had already seen was fun for us,” he chortles. “Before Rajinikanth could say his dialogue, we would say it for him.”
The young man is Sagairaj, he is a film buff and Rajinikanth fan, and a few minutes into Jagannathan Krishnan’s remarkable 2010 documentary Videokaaran (roughly translatable as Video-fellow, or Video-wallah), we learn that he grew up to run a video parlour himself.
But since the demolition of Mumbai’s Rahul Nagar Video in 2006, and the general crackdown on semi-legal video theatres like it, neither Sagai nor his friends watch movies much. “People here earn ₹10 a day, some earn ₹50. They’re not going to go to multiplexes!” He mentions a local single-screen cinema where tickets are ₹80. “How is a man like that going to take his family to the theatre? Film has been snatched out of his hands.”
For much of the 20th century, cinema was among the few pleasures that the poor man in India could afford. (And I say ‘man’ deliberately here, because women did not — could not — go to theatres anywhere near as much as men could and did.) The film industry — whether Tamil, Telugu or Hindi — needed the urban poor to watch its films. And the strongest connection between that audience and the industry were its stars.
Film scholar Sara Dickey, who worked on fan clubs in Tamil Nadu, has argued that the masculine hero in south India is always depicted as sharing “either the attributes or the desires of the urban poor”. Figures as far apart in time as MG Ramachandran, Sivaji Ganesan, Rajinikanth and Kamal Haasan, who have successfully cultivated distinct images, reveal a remarkable degree of overlap in the characteristics for which they are praised by their fan club members: generosity, compassion, humility, “the heart of a child”, strength and virility and talent in the dramatic arts. Crucially, the star is believed to feel concern for his (lower-class) fans, to recognise their “deserving but less influential” status. As the famous Rajinikanth song in Basha goes, “I am the heart that feels, I am the friend of the poor. I will always be the friend of the poor.”
Sushma Veerappa’s When Shankar Nag Comes Asking (2012), another documentary that explores film fandom as a way to understand urban male working-class culture, offers glimpses of how this belief in the star’s “good nature” and welcoming behaviour is circulated by fans. Veerappa’s film focuses on auto drivers in Bangalore, and their particular adoration of the late director-actor Shankar Nag, who legendarily played an auto driver in the superhit film Auto Raja (1980). Among the central characters in Veerappa’s film is Ramanna, an autorickshaw driver who is also president of the auto drivers’ section of the Kannada Protection Front. A film buff who came to Bangalore with dreams of becoming an actor, Ramanna remembers that he once chased after Shankar Nag and his brother Anant’s car: “Anant Nag remained in the car, but Shankar Nag stepped out. A real gentleman.”
Rajinikanth too, famously played an auto driver in Basha, immortalised by the song Naan autokaaran(I’m an auto-wallah). Early in Videokaaran, we see a conversation between several young men dissolve into an only half-jokey competition between Amitabh fans and Rajinikanth fans. Rajini’s entry speeds up the movie, says Sagai; with Amitabh, it’s not like that, you have to wait for him to open his mouth, for the dialogue. But the real basis on which Rajini wins the argument is that there aren’t fan clubs for Amitabh like there are for Rajini. Rajini gives out ‘messages’ that his fans take seriously, like when he told autowallahs to always stop and give pregnant women a free ride. “Even those who don’t listen to their families, listen to Rajini.” You can see how the wheel of fandom turns full circle: it is Rajinikanth’s relationship with his fans, his perceived ability to influence their behaviour that makes them even more devoted fans.
What is striking about Sagairaj’s relationship with the stars is its quicksilver quality. One moment he is talking about Rajini being responsible for his interest in being a kriya yogi, a deep sense of spiritual connection that dates back to his troubled childhood: “As a child, I had problems with my family. Whenever I saw Rajinikanth movies, I got strength.” The next moment, he is describing how all the actors “enter into him” when he’s picked up by a cop and wants to pretend to be badly hurt so the cop will let him go. Here, the channelling of his heroes is purely instrumental.
In Sagairaj’s relationship with cinema, you see an intimacy that people usually only have with gods they truly believe in: they’re close enough to dismiss occasionally.
But the world upon which Videokaaran casts its brief but compelling light has largely disappeared. The god of cinema no longer needs the poor. So the poor have been robbed of cinema, and even of video theatres. Television is a poor return gift.

Published in the Hindu Business Line.
Posted by Trisha Gupta at 20:22