Picture This: Who is Miss Lovely?

My new film column Picture This will appear every month in the Hindu Business Line's new weekend paper: BLink. 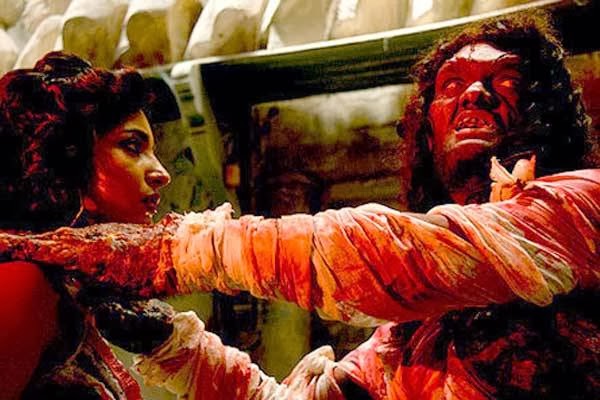 An early scene in Miss Lovely has Nawazuddin Siddiqui walk into a C-grade film set where some women, dressed in the scanty animal skins and feathers that served ’80s Hindi cinema as ‘tribal costume’, are performing some heavy-breathing dance moves. As Siddiqui’s Sonu looks on, there’s an attempt to make one of them get her kit off. She puts up some muffled resistance. “Madras mein toh saari public ke saamne nangi hui thhi! (In Madras you got naked in front of the whole public!) What’s your problem now?” demands the long-haired man in charge. “That’s why I say these husbands should never be allowed on the set!” Then he switches gear to address the befuddled man standing in the corner: “You! Explain things to your wife.

What is it about the woman in a tribal costume that makes us uncomfortable? Is it her being forced into displaying her nakedness? Is it the way her boss appeals to her husband, showing us that entry into the world of paid work has neither freed her from the surveillance of family, nor failed to create new shackles?

Set on the fringes of the Bombay film industry in the late ’80s, Ashim Ahluwalia’s Miss Lovely follows the fortunes of two brothers — the sleazy, ambitious Vicky and the purist, naive Sonu — who, as the Duggal Cine Combine, produce low-budget horror sex films; films that play surreptitiously in cinemas in lieu of the official feature. There are men in these films, too, but the focus — both for cogs in the wheel like Vicky and the larger sharks he aims to work for — is on the women. “Ladkiyan khoobsoorat honi chahiye, aur besharam bhi (The girls should be beautiful, and also shameless),” as one lascivious distributor puts it.

For a film so self-consciously arthouse in its nuanced recreation of milieu — the art direction, sound and cinematography produce a pitch-perfect sense of ’80s grime — Miss Lovely contains surprisingly tabloid villains. But perhaps these men making innocent young women swill whiskey from cut-glass tumblers fit right into this pre-liberalisation world, where raids are televised on grainy Doordarshan, with commentary about ‘rampant immorality’ that sounds like it’s coming from another planet. Maybe the underbelly of state-sponsored repression is necessarily debauched excess.

But what is more worrying is the way Miss Lovely seems to serve up female victims and vamps for our righteous delectation. The newbie starlet participates gleefully in the unceremonious ouster of the has-been star, and then swiftly progresses along her own trajectory of decline. Meanwhile, the idealised, mysterious Pinky, in whose apparent innocence Sonu places his faith, emerges as the femme fatale.

Is there no way out of this dialectic of innocence and corruption? The industry elicits shamelessness, rewarding women who can produce it with work and sometimes a certain fame — and then turns around and crushes them. They’re damned if they do, and damned if they don’t.

One wishes that these films allowed one to see more of the way desire is intertwined with desperation, ambition with extraction. As the saying goes: the only thing worse than being exploited is not being exploited at all.

A simple exploitation narrative also leaves unasked the question of how women experience the transformative presence of the screen. What is the relationship between the shy girl in The Dirty Picturewho watches incredulously as audiences whistle at her on-screen persona, and that on-screen persona itself, of the heaving bosom and archly bitten lip?

The question of pleasure in the performance of the sexual is a difficult one. And like with much else, beauty lies in the eyes of the beholder. In Ahluwalia’s film, a plain, middle-aged woman walks into a film production office. “Main sexy dance bahut achha karti hoon (I’m great at sexy dance),” she says ingratiatingly, breaking into a set of belly-swishing moves. For many, the scene produced embarrassment, distaste, or pity. But if we do not judge our friends — or ourselves — for posting photos to elicit compliments of hotness on Facebook, should we judge this woman, or anyone else hankering for a screen image? The self-affirmation involved might not be that different.

Published in BLink.
Posted by Trisha Gupta at 18:49