Film review: With Department, RGV tips over into the void 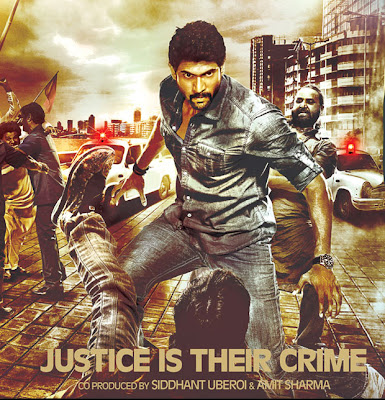 “Ram Gopal Varma on a roll is one of journalism’s guilty pleasures,” writes Meenal Baghel in her book, Death in Mumbai. I have no experience of RGV’s skills as a raconteur, but watching his films is swiftly becoming one of journalism’s forms of penance.

In Department, Varma casts Sanjay Dutt and Rana Daggubati as senior and junior encounter cops, Mahadev Bhosle and Shiv Narain respectively, in a sordid crime drama that he has recently described as “the other side of Company”. But it is difficult to believe they are the work of the same man. Comparisons to Company or Satya – films whose masterful characterisations and urban realist aesthetic made Varma the defining influence for a whole new genre of Mumbai underworld films – seem like a travesty when you’re watching a film as amateurish as Department.

Even at the height of his cinematic powers, Varma had a tendency towards excess. His penchant for deafening background scores, gravity-defying camera angles and menacing expressions was once put to more-or-less appropriate use in horror films, a genre he made his own with Bhoot (2003). Now these have become the unfortunate hallmarks of RGV’s cinema in general, whether he’s making a political thriller like Rakthacharitra (2010) or a sex-crime drama like Not a Love Story (2011). Since the mega-disaster of his supposed Sholay remake, Ram Gopal Varma ki Aag (2007), every film he releases sparks avid discussion on whether it will mark ‘a return to form’. With Department, Varma tips entirely over into the void.

First of all, the camera angles are outlandish, even by Varma’s usual standards. Instead of a single traditional camera, Department is shot using several Canon EOS 5D cameras, small cameras that can be fixed in the most unlikely places. In pre-release interviews, Varma has spoken of this technological innovation enabling him to “reinvent the cinematic language” in the hope that the audience “would feel the enhanced impact of what the characters are trying to express”. So forcing us to constantly look up at Rana Daggubati’s outsize torso as if we’re fallen at his feet is a way of experiencing the pain of being Shiv Narain? Well, my head certainly hurts.

Second, Department outshines most RGV films in the gratuitous violence department. Every scene – even an ostensibly emotional flashback in which Shiv Narain tells his betrothed Bharti how he first met his boss Mahadev Bhonsle (Sanjay Dutt) – is an opportunity to up the gore quotient. Bullets come whizzing directly towards us (blame those “enhancing” cameras), fresh fountains of blood spurt from every wound, character actors die like rats. And the more of this we’re shown, the less it matters.

Our total desensitisation is aided by the soundtrack, which could have skipped the details and simply overlaid the sounds of shattering glass and breaking brick walls over a regular stream of gunshots.

The worst part of the film, though, are its cardboard characters. It isn’t just that this is a world in which the ostensibly revolutionary female gangster character (Telugu actress Madhu Shalini) can only get screen space if she’s got something to roll round her tongue lasciviously, while the role of all wives – whether the yoga-practising Satya (an incredibly fake Lakshmi Manchu) or the bespectacled doctor Bharti (Anjana Sukhani) – is to swap recipes, chat prettily with their husbands’ political masters and defend what their husbands do, regardless of how many unarmed men they kill before dinner. It isn’t just that the police in this film are indistinguishable from the mafia, or that the mafia are indistinguishable from the politicians (represented here by Amitabh Bachchan as the caricaturish Sarjerao, who wears a tinkling bell on his wrist to – you guessed it – bajao everyone).

The problem with Department is that it takes this world entirely for granted; it doesn’t deem it necessary to provide any sort of moral compass at all, neither for its characters, nor for us. But as Sanjay Dutt says in one of Nilesh Girkar’s awful grandstanding dialogues: “Kisne kaha ki bekasoor ko sazaa nahi lagti?” Perhaps the moral of RGV’s tale is that there is no moral compass left.

But what we get is not a dark, self-conscious meditation on the internal rot within the Indian police. That is a film that is crying out to be made. Instead, Department is a strangely listless combination of adulatory policier and nudge-nudge-wink-wink tale about the corruption of power. The joke’s on us.

Published in Firstpost.
Posted by Trisha Gupta at 13:05