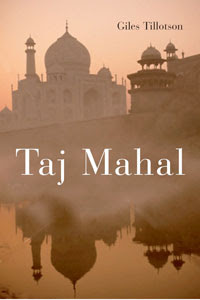 There can’t be too many pieces of architecture in the world that deserve a book to themselves more than the Taj Mahal. And when a building is as mythologized in the popular imagination as the Taj is, the best thing a book about it can do is to incorporate those myths into the telling. Giles Tillotson does this with consummate skill – never depriving us of the pleasures of a juicy story, while all the while unerringly sifting fact from fiction in a surprisingly easy style. Thus, we get a memorably wry account of the familial politics of the Mughals, locating the Taj spendidly and accurately within a web of personal and cultural histories, while not refraining from the occasional jibe – eg. Aurangzeb’s “outrageous display of crocodile tears” upon hearing of the death of his imprisoned father.

As a historian of South Asian art and architecture, Tillotson is clearly in a position to trace the building’s architectural form to its variously Timurid, sultanate and Indian roots. He also deals summarily with the historical and artistic controversies that have plagued the Taj since the nineteenth century, laying to rest such persistent ghosts as the duplicate-black-Taj-across-the-river theory, or the suggestion that the Taj’s craftsmanship, and more perniciously, its chief architect, were of Italian origin. Extracts from gushing travelers, grudging colonial historians and ranting Hindutva “historians” are woven expertly into a persuasive, measured narrative that pays as much attention to the building itself as it does to the reasons why it has been seen so differently by different people.

Finally, Tillotson provides a fascinating account of attempts to recreate the Taj Mahal in painting, photography and architecture, and a crucial chapter about the monument’s conservation, detailing the indignities it was subjected to by Jat marauders and British picnickers alike, the repairs and additions undertaken by Curzon and the more recent threat posed by the “Taj Heritage Corridor” project.

A slightly edited version of this review was published in Outlook Traveller magazine, December 2008 issue.
Posted by Trisha Gupta at 17:11