New Dilli Darshan: On the Metro 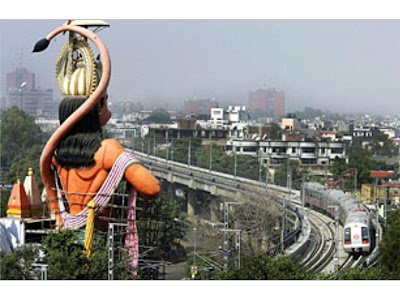 Saturday afternoon, Pragati Maidan Metro Station. Swarms of people walk the long ramp from the recently-inaugurated station to the actual entrance of Delhi’s largest exhibition ground, where the India International Trade Fair is on. But I’m not headed that way. Today I’m off to see a Delhi different from the one I live in. No, no secret destinations – I’m just taking the Blue Line a bit further west than I usually do.

The Pragati Maidan platform looks out over Appu Ghar, Delhi’s original amusement park. Down below, I can see the famous Bumper Cars, red and yellow and blue. I only ever rode them once, in 1984, with my colony-best-friend Pooja Oberoi, whose dad stood in a very long queue to get us into what was (certainly for Pooja and me) the most important thing about the Asian Games.

The train starts to move. We pass the stupa-like Supreme Court dome, cross Tilak Marg and go underground. As we enter Connaught Place, I am dismayed to hear many voices around me whisper to each other, “Let’s go, it’s Rajiv Chowk.” It looks like Mani Shankar Aiyar – and what an autowallah I met last week called Delhi’s “rajnitik bukhaar” – have won out. The imperial grandeur of the old name seems to be finally crumbling before the political tokenism of the new.

Above ground again, we head past the once-legendary furniture haven of Panchkuin Road (the Metro has ploughed through, leaving shops on both sides unglamorously cramped). The city looks different from up here, less daunting than Delhi usually is at ground level – though perhaps more inscrutable. We cross Videocon Tower and the unmissable giant Hanuman, eternally covered in scaffolding. I’m determined not to get off anywhere I’ve been before, so I ignore the temptations of Karol Bagh and sit tight, all the way to Rajouri Garden.

The signs have been beckoning from a long way away. Sushmita Sen, wrapped in a fetching pink bathrobe, sitting atop a Carmichael House bedspread. As we pass the ad, the girl next to me turns to her boyfriend and announces knowledgably, “It’s an ad for Rajouri.” And indeed, as you exit the Rajouri Garden Metro stop, there’s Sushmita again, announcing the City Square Mall. One of the many malls and multiplexes that have sprouted along the Metro route, City Square is superbly sunlit under a vaulted glass roof, and even has a green patch outside where some employees are catching their lunch, looking almost like the government clerks at New Delhi’s roundabouts – except these have yellow uniforms. Inside, there are a zillion people under 25, most of them hanging out at the inviting-looking Café Terrace. But my companion makes some snobbish wisecrack about Mexican made in Rajouri, so we share a very fulfilling chaat platter at the kitschy-cool Khaaja Chowk instead.

I had thought of taking the train all the way to Dwarka Sector 9, a full sixteen stops away. But on the way to Rajouri, I’ve been waylaid by the idea of Shadipur. Not by the huge DTC bus depot – that you can see from the train. But because I’ve always wanted to go looking for Kathputli Colony, that truth-is-stranger-than-fiction locale which Rushdie put to such magical use in Midnight’s Children. So I take the Metro back.

At Shadipur, the giant concrete pillars of the overground line tower incongruously over a vast and dusty expanse of tired-looking buildings. The third rickshawala we ask agrees to take us to the colony of puppetteers. Our rickshaw hasn’t even stopped when a man rushes up to us, yelling, “Kutta chahiye, kutta? Dog?” Baffled, we assure him we don’t want a dog, only to walk into a raucous party of dhol players in bedraggled costumes. But when in doubt, walk briskly. Especially if the path is strewn with piles of garbage, and the air thick with flies. As I ask after a Bhoole-Bisre Kalakar Trust I’d once heard of, a tall young man comes up to us. Have we been sent by Rajiv Sethi, and would we like to meet the best puppeteer in the colony? We haven’t, but we would. So we follow him to the house of his uncle, Naurang Pradhan Bhat, once the toast of the Festivals of India. We’re back in the eighties again.

The old man sits hunched up on a charpai, a bidi clenched in his wizened fist. He doesn’t do shows anymore, but his son Lala does. And his kathputlis are amazing. There’s a Jogi, an evil Jadugar, the beautiful Anarkali, and the incredible shape-shifting Behroopiya. Each has a painted wooden face, painstakingly-sculpted moveable joints and specially-stitched clothes. We watch as Lala’s young apprentices make the Jadugar walk, turn cartwheels, and slither menacingly along the floor. Then it begins to get dark, and I ask them the way back to the Metro. Lala tells an apprentice to take us back to the main road. Then he grins. “Bas vahan se toh Metro hi Metro hai, uske peechhe peechhe chalte rahna!”

(This is the unedited version of a piece that appeared in Outlook Traveller magazine's December 2006 issue.)
Posted by Trisha Gupta at 13:32