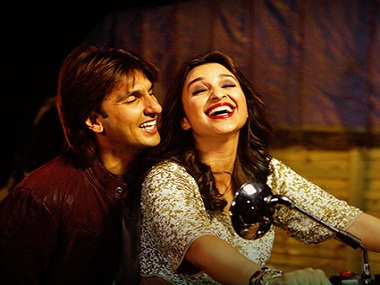 In an early scene in Ladies vs. Ricky Bahl, a lean, limber young man with floppy hair and a winsome smile appears at a Delhi businessman's doorstep with the businessman's 20-something daughter passed out in his arms. It's the middle of the night, and the parents look worriedly at each other and their sleeping daughter. But when the young man – who's just introduced himself as Dimple's boyfriend and her gym trainer – makes to lay the sleeping girl down on the living room sofa, the mother says to him, "Beta, oopar hi lita do..." (and after a minuscule pause that already contains an undeniable trace of admiration for her daughter's catch) "Bodybuilder ho na?"

As you watch Ranveer Singh carry the pleasantly-plump Dimple Chaddha effortlessly up the stairs, and then effortlessly charm the pants off her gun-toting dad on his way down them, you can't help but think of the last captivating burglar who appeared on the Hindi film screen: Abhay Deol in Oye Lucky Lucky Oye (2008). In establishing his conman protagonist as the sort of supremely affable guy who can walk into strangers' homes and out with their televisions (or their daughters) because everyone just trusts him at first sight, it's clear that director Maneesh Sharma is channelling Dibakar Banerjee. But it's equally clear that Ricky Bahl (whose name we know from the title but never hear until the film's final scene) is a kind of Lucky-lite. Ladies vs. Ricky Bahl is quite obviously intended to be a much more light-hearted film than Oye Lucky ever was. If Lucky was all about the nuanced, perfectly narrated backstory – complex relationship with a dominating but distant father, needy childhood, desire to join the English-speaking "gentry" – then Ricky is very deliberately a man without a past. So deliberate, so total, in fact, is this characterisation that the one time we hear Ricky speak of childhood, deprivation and emotional attachment to family (okay, to a family bungalow on Delhi's Barakhamba Road), we pretty much know this has got be a con.

Maneesh Sharma has made a breezy, fast-paced, intricately plotted film which wouldn't be half as much fun if its conning hero had depth and interiority – if we already knew what he was really like inside, how would he ever surprise us? So we don't know, and neither do the ladies he turns the charm tap on for: Dimple from Dilli, the pampered, wilful daughter of a "self-made" Punjabi businessman; Raina from Bombay, the hard-headed, no-nonsense executive with a reputation for making the impossible possible; and Saira from Lucknow, the demure young widow who works in her in-laws' small textile store.

Forging these three very different women from their madly different backgrounds into an unlikely sisterhood against the man who conned them is a masterstroke, and provides a lot of great moments. Though there is no doubt that the film's makers, including the inimitable Habib Faisal of Band Baaja Baraat and Do Dooni Chaar fame, who's written the dialogue here too, know the Dimple-from-Dilli milieu a hundred times better than the other two, so much so that poor Raina-from-Bombay (Dipannita Sharma) and Saira-from-Lucknow (Aditi Sharma) don't have much of a chance. They do perfectly well in their well-cast and competently-written little parts, but it is debutante Parineeti Chopra as Dimple who walks away with the trophy. From her first moment on screen, pulling irritatedly at the deep neck of her blingy blue top to show some cleavage before she reluctantly wears a choli over it for the benefit of her parents who think she's going to a sangeet, to her genuine disbelief that any boy could ever choose another girl over her, Dimple has us eating out of her hands. We might laugh at her continued schoolgirlish besottedness for the 'Sunny' who stole her heart and then her father's money, or at her unsophisticated blabbermouth ways even when faced with the cool and collected Raina, but she's the one person in this film we know inside out. And we can't help but love her.

Without giving away too much that you haven't already guessed, let me say that Ranveer and Anushka Sharma get to rework something of their Band Baaja roles: here too they become business partners in the third meeting, and are meant to be entirely professional about it before emotions get in the way. Anushka is perfect as a super-chirpy Hometown salesgirl who can sell anyone anything (even if this channelling of her inner aspirational Punjabi girl could start getting tiresome if she does it one more time). And she and Ranveer, even though they don't get anywhere near the surprising goosebumpy chemistry of Band Baaja, do achieve an easy, believable camaraderie that most Bollywood couples never will.

It's a really fun film overall, and like I said, it's not setting out to be profound. Though between the Hometown section, with its hilarious references to people buying things they don't need, and the other brilliant episode where 90-rupee Goan wines are packaged in vintage bottles and cheap factory seconds sold off as Prada, it feels like the film might just have a secret message about conmanship after all.

Published in today's Sunday Guardian.
Posted by Trisha Gupta at 12:16