My op-ed piece in the Indian Express:

Where Hindi teachers are always khadoos 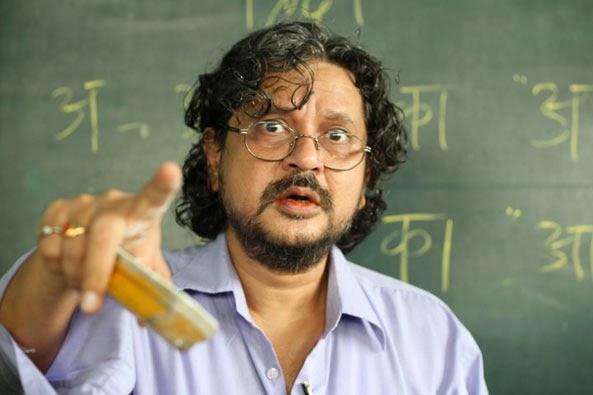 Amole Gupte's Stanley ka Dabba, released last week, is a quiet gem of a film about a child who gets picked on because he doesn't bring his own lunchbox to school. He gets picked on, oddly, not by his classmates -- who're all rather fond of him and his stories and happy to share their dabbas -- but by the Hindi teacher, Babubhai Varma aka Khadoos, who doesn't bring his own lunch either and preys on others'.

The film uses the ostensibly shared tiffinlessness marvellously, to reveal the gulf between Stanley and Varma -one a child trying to make the best of his circumstances, the other an adult shamelessly exploiting both the kindness of other adults and the powerlessness of children.

In terms of understanding a child's world, Stanley ka Dabba is a remarkable film. It is only because we see him through children's eyes, for example, that Varma's tragicomic gluttony, his near-insane obsession with the kids' dabbas, his dogin-the-manger-ish desire to punish Stanley, seem to belong not to caricature but to fable.

There is something else in this film that seems to belong to the world of fable, though -and this is a spoiler -which is the explanation for why Stanley has no dabba. It turns out that he is an orphan, left to the care of an evil chacha who makes him serve and wash dishes in his small-time eatery, in exchange for a place to live. The film's final half-hour, with Stanley saying an adoring good night to photos of his parents before he goes to sleep on a counter in the dhaba, prep the viewer for the child labour statistics at the end of the film.

It may seem churlish to criticise a film made with such unequivocally good intentions, but I was struck by Stanley ka Dabba's crude attempt to gain the sympathy of a presumed middle-class, primarily English-speaking audience, by creating a child character who goes to a good convent school and recites English poems, just like us. It's only once that is done that he can be a conduit for a child labour narrative: a fascinating reversal of all those Hindi films until the 1990s in which the poor hero with whom the bulk of the audience identified, turned out, in the end, to be a rich man's lost heir.

One shouldn't be surprised, either, that a film emerging out of workshops that director Amole Gupte held with the children of the Holy Family School in Mumbai should have the English teacher Rosy ma'am as the sensitive one and the villainous Varma as Hindi teacher. Film critic Raja Sen, in his review of Stanley, notes that "Hindi teachers have a tough life, appearing intimidating to their students by default, by dint of the scale of sheer listlessness their subject provokes", eventually turning "grouchy and irritable". Varma, he goes on to say, "is strange even by Hindi teacher standards".

The "strangeness" of Hindi teachers, I would suggest, is unique to the English-medium world in which we increasingly bubble-wrap our children: a world in which the Hindi teacher is doubly condemned -first by teaching a subject that is dismissed as irrelevant, and second by being someone not necessarily fluent in English.

Last month's Bollywood release for children, a superhero film called Zokkomon, has city boy Kunal (Darsheel Safary, also orphaned and left to the care of an evil chacha!) arriving in a village school where all it takes to establish that all the teachers are idiots is for one of them, the bucktoothed Tinnu Anand, to mispronounce a sentence in English. It's revealing to set Stanley ka Dabba and Zokkomon against a remarkable children's film made in 1977: Gulzar's Kitaab. It, too, is about a middle-class boy of a certain age, who gets into trouble at school and spends much of the film wandering the world, or at least the city, by himself.


But there the similarities end. Stanley's wanderings are those of a good boy -either to preserve his dignity by not going to school dabba-less, or to get to a concert audition. Kunal in Zokkomon is abandoned in the city by his chacha and only survives by befriending a young woman called Kittu didi with whom he leads a kind of fantasy-holiday-life.

We have left behind forever the world of Kitaab, a world in which the middle-class child thought it was exhilarating to run away from a regulated middle-class life. No one who has watched Master Raju hugging his knees in joy atop a moving train as the engine driver sings, "Dhanno ki ankhon mein raat ka surma", can ever forget the thrill of it. There was danger in Kitaab, too, and eventual return - but the world outside the middle-class bubble was still something to be explored and understood. Not merely to be protected from.